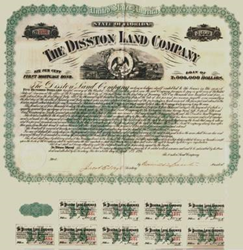 Hamilton Disston purchased four million acres of land in Florida, the most land purchased by a single person in world history

Scripophily.com is offering a beautifully RARE bond certificate from the Disston Land Company issued in 1894. This historic document was printed by the W. F. Murray’s & Son Company of Philadelphia and has an ornate border around it with a vignette of an eagle in the center flanks by palm trees and a lake. This item has the signatures of the Company’s President, Hamilton Disston and is over 112 years old. 17 coupons attached on bottom.

Hamilton Disston (August 23, 1844 – April 30, 1896), was an industrialist and real-estate developer who purchased four million acres of Florida land in 1881, an area larger than the state of Connecticut, and reportedly the most land ever purchased by a single person in world history. Disston was the son of Pennsylvania-based industrialist Henry Disston who formed Disston & Sons Saw Works, which Hamilton later ran and which was one of the largest saw manufacturing companies in the world.

Hamilton Disston’s investment in the infrastructure of Florida spurred growth throughout the state. His related efforts to drain the Everglades triggered the state’s first land boom with numerous towns and cities established through the area. Disston’s land purchase and investments were directly responsible for creating or fostering the towns of Kissimmee, St. Cloud, Gulfport, Tarpon Springs, and indirectly aided the rapid growth of St. Petersburg, Florida. He furthermore oversaw the successful cultivation of rice and sugarcane near the Kissimmee area.

Although Disston’s engineered canals aided water transport and steamboat traffic in Florida, he was ultimately unsuccessful in draining the Kissimmee River floodplain or lowering the surface water around Lake Okeechobee and in the Everglades. He was forced to sell much of his investments at a fraction of their original costs. However, his land purchase primed Florida’s economy and allowed railroad magnates Henry Flagler and Henry Plant to build rail lines down the east coast of Florida, and another joining the west coast, which directly led to the domination of the tourist and citrus industries in Florida. Disston’s immediate impact was in the Philadelphia area, where he was active in Republican politics and a philanthropist, but his legacy is often associated with the draining and development of Florida.

Disston committed suicide on April 30, 1896, after a disastrous freeze led many families to relocate further south. Disston’s land company was forced to stop payment on all outstanding bonds.

Scripophily (scrip-ah-fil-ly) is the name of the hobby of collecting old stock and bond certificates. Certificate values range from a few dollars to more than $500,000 for the most unique and rare items. Tens of thousands of Scripophily buyers worldwide include casual collectors, corporate archives, business executives, museums and serious collectors.

Scripophily.com – The Gift of History is the Internet’s leading buyer and seller of collectible stock and bond certificates and have items on loan for display in the Smithsonian’s Museum of Financial History in New York. Our company has been featured on CNBC, USA Today, Associated Press, Reuters, Nightline, Today Show, Baltimore Sun, and Washington Post and in many other media publications. The company also offers the World’s #1 old stock research service at OldCompany.com and offers high resolution scans for publications. Scripophily.com has over 17,500 selections on its website.

Scripophily.com / Old Company Research Service, founding member of the Old Stock Exchange, is the successor company to all material published by the Marvyn Scudders Manuals, the Robert D. Fisher Manuals, R.M. Smythe Stock Research Service, and the Herzog & Co., Inc. obsolete research services. These services have been performed continuously for over 136 years since 1880.

Scripophily.com and Old Company Research Services was founded by Bob Kerstein (Bob.com). Bob is a CPA and CGMA, and has more than 39 years of senior management experience in the Cellular, Cable TV, Satellite, Internet, Professional Sports and Entertainment Industries. Bob is also the President of the Professional Scripophily Traders Association (PSTA) and co founder of the American Stock and Bond Collectors Association.